The economic outlook is also trickier because inflation, which is running at about 6 per cent, is hitting consumers and businesses, just as the government has less ability to spend to blunt their pain than it did during the Covid-19 pandemic. The cost of servicing France’s large public debts has begun to climb along with interest rates, prompting a stern warning recently from the national auditors.

The cocktail of risks has the French business elite worried about Macron’s ability to enact the rest of his economic agenda without provoking protests like the gilets jaunes movement in 2018. Airport and rail workers have already gone on strike for higher wages, and far-left leader Jean-Luc Mélenchon is planning protests against the rising cost of living.

Finance minister Bruno Le Maire has been categorical that the government will push ahead. Asked if Macron’s era of pro-business reforms was over, he said in an interview: “It must continue. Not everything requires legislation, so we will use every tool at our disposal to continue to support wealth creation in France . . . and for that we need pro-business reforms.”

Le Maire said he believed the government’s centrist alliance would be able to cobble together the votes it needed to pass laws by compromising with moderates. That is far from certain, though, given how France has less of a tradition of such political compromise than elsewhere.

An upcoming draft bill to help blunt the impact of inflation on citizens may fail to garner enough votes to pass, or see its €20bn price tag balloon once the opposition adds amendments. “There is a real risk that there are no more major economic reforms,” said one banker.

There is much still on Macron’s to-do list. Reforming the costly pension system by pushing back the retirement age from 62 to 64 or 65 is key to improving public finances. He has also pledged to cut €7bn a year in “production taxes” — taxes based on turnover, staff or buildings rather than profit.

Behind the scenes, though, there are signs that politicians and chief executives are worried. An executive at a big private equity firm recounts being asked by a finance ministry official at a recent dinner party whether the company will keep investing in France. “He told me the government would not be able to do as much for us as in the past,” says the investor.

At a business conference in Aix-en-Provence over the weekend, corporate bosses questioned whether the government could manage the coming political and economic challenges. “They seem confident — maybe too much so,” said one chair of an industrial company. 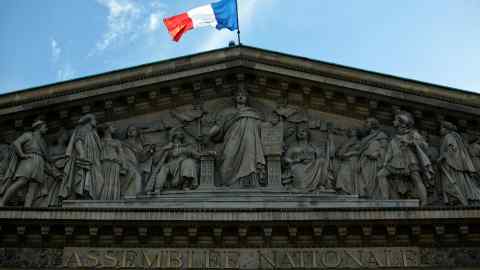 After all, French people still tend to distrust business. Companies from LVMH to Sanofi are criticised for paying dividends, and a recent government move to finance a new chip factory that will create 1,000 jobs was dismissed as a handout. Macron himself is under fire this week for helping Uber expand in France after an investigation by the Guardian newspaper and other media groups.

The government is also under pressure from the opposition to impose a so-called windfall tax on companies such as oil major TotalEnergies that have earned record profits since the Russian invasion of Ukraine. Far-right leader Marine Le Pen called for “war profiteers” to be taxed on their “super-profits”.

Macron’s government has not rejected a windfall profit tax out of hand, although Le Maire said he wanted to wait until the end of the year to judge whether it was needed. While it may be politically popular, a windfall profit tax would “take us further away from our political DNA, which consists of lowering taxes and supporting entrepreneurs”, he said. It might also make the CEOs attending Choose France next year think twice.